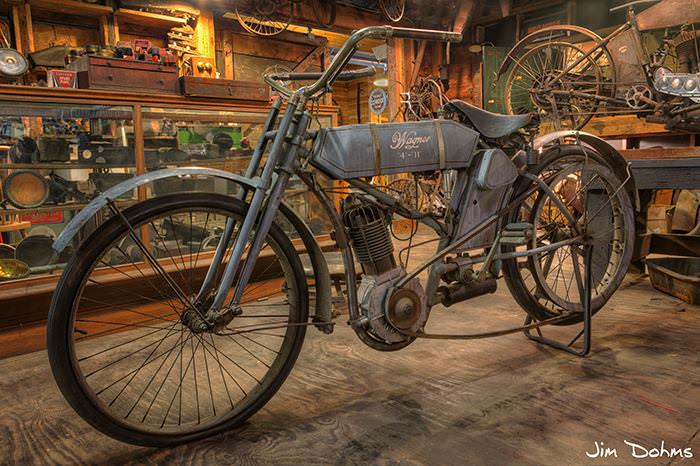 My fascination with the Wagner Motorcycle goes back to about 1980 when I saw one at my old pal Chuck Lipskys shop in Galesburg, Illinois. It was 1994 before I found a nice original 1909 model Wagner at an auction. I still own that machine and have always been amazed with the company’s history and the genius inventor.

First of all, Minnesota was not a manufacturing hub at the turn of the century. It has been noted the driving force of the brand was its founder George Wagner. How he was able to design, build and market his machine for a period of 12 years is nothing short of a miracle. 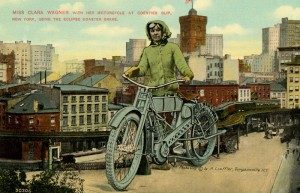 And a reliable machine it was. As the story goes George’s daughter Clara successfully completed many competitions and cross country races in the day. No small accomplishment for a lady rider in 1911. In fact when she won the Chicago to Indianapolis road race in 1911, and was denied the trophy because she was a woman!

Fast forward to march of 2015. The EJ Cole auction of rare American motorcycles. Over 150 machines netted EJ over 12 million dollars during the 2 day event, shattering world records. The auction included a 1907 Harley, dubbed the “Mona Lisa of Harley-Davidsons”, that fetched $715,000,  and a 1915 Cyclone that brought a cool $852,500

This is where Cris and Pat found the 1911 Wagner. All original with damaged original paint. Cris was very familiar with the Wagner story, particularly Clara Wagner. Cris is an avid motorcyclist, and has many accomplishments under her belt, including being an author. She wrote, “The American Motorcycle Girls”, & “The American Motorcycle Girls Cannonball Diary”. Cris has been inducted into several “Hall of Fames” and has also raced her vintage 1915 Harley (named EFFIE) in the 2010 race across America; The Cannonball. 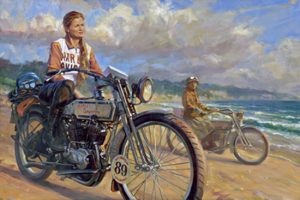 Rumor has it that when the Wagner came up for auction and Cris opened the bid, the house became quiet in a hurry and the hammer went down.

Shameless respect. When the machine arrived at Wheels Through Time, Bob and I were very excited and could not wait to start. Unfortunately, we had a camera crew and a TV show to make. On you mark, get set, wait…. and again. Eventually we got started. 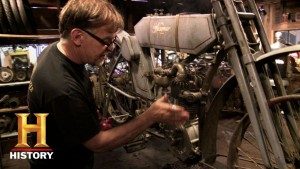 We made quick progress turning the motor and finding spark for the plug. Discovering the initials “CW” is still haunting us all. Also a tool box key was found with the same CW… We did not add one piece or part to the bike. The all night work on the paint was most rewarding for Bob, as was the seat rejuvenation.

When Pat and Cris arrived, we had not run the machine and this is where things got interesting. In front of all, we tweaked and turned, removed and revitalized several key components and in the end it started and ran – perfect.

The scariest part of the process was the 104 year old belt. All the pedaling and it did not break and remains in the same shape today. The Wagner is now on the most generous loan at the museum from Cris and Pat and she runs– thank you Clara!