The Hill Climb Hill here at Wheels Through Time consists of the rarest of Harley Davidson, Indian, and Excelsior hill climbers made from 1928 through 1949.

As the glory days of American board track racing faded, American motorcycle manufacturers looked skyward. Hillclimbing became the venue for the “big three”, Harley Davidson, Indian, and Excelsior. During the late-1910s and early-1920s, large wooden stadiums across the country filled to capacity as spectators watched their favorite riders lap the tracks at speeds in excess of 100 mph.  However, the introduction of several new classes of racing provided more than a distraction, as the 21, 30.50, 45, and 61 cubic inch classes fought for the limelight.  American spectators failed to identify with the riders of these small purpose-built machines, preferring the larger big-twin production models as their mount.  As a result of decreased attendance, and quickly deteriorating riding conditions, America’s board tracks were taken down one by one, and a new form of racing would capture the interest of fans, riders, and manufacturers alike.  Taking much inspiration from the race-proven technology of their board and dirt-track racers, manufacturers looked towards the hill to prove the merits of their machines.  Hillclimb competitions were a place where the “Big Three” could show the power and durability of their equipment, thereby increasing sales and brand loyalty ensuring the survival of the company during increasingly difficult times.  While the earliest professional hillclimbs featured many modified street and “track” machines, it would not take long for Indian, Excelsior, and eventually Harley-Davidson to take on the limited production of  purpose-built, factory specials for their 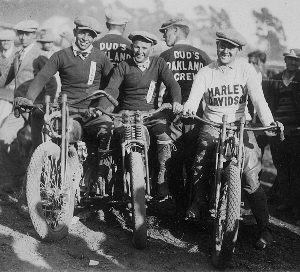 riders.  By 1928, both Indian and Excelsior had highly developed both their 45 and 61 cubic inch factory climbers and dominated the sales leading Harley-Davidson on the slant taking the 1929, 1930, and 1931 National Hillclimb Championships.  While Harley-Davidson had produced an effective 61 cubic inch machine that was competitive in the late-1920s, it wasn’t until the 1930 sales season that they would introduce a factory hillclimber for the increasingly popular  45-inch class – the infamous “DAH”.  Tough times for the entire motorcycle industry had set in, and by 1931 Excelsior President, Ignaz Schwinn, closed the doors at the Chicago factory.  Indian was operating on a mere 5% of capacity and Harley-Davidson sales figures reached an all-time low in 1933.  The spirit of competition continued, and the fight for top honors remained a priority for the America’s only two remaining manufacturers.  The great depression had taken its toll on motorcycle production and sales. However, the “Big Three” maintained a racing department that was essential in sustaining operations.  While Excelsior officially ceased motorcycle production in 1931, without the tremendous effort of manufacturers to be “King of the Hill”, perhaps neither Indian or Harley would have lived to see the next chapter in American motorcycling.  The Wheels through Time Hill Climber Collection is unparalleled in the collector world today. With over a dozen factory specials and many additional “privateer” machines, the museum’s grand Exhibit is a tribute to the glory days of American hill climb history. 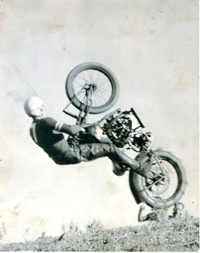 This machine is identical to the record setting machines of George Perry in the heydey of American Board track racing.

With the help of factory sponsored riders, Indian would win the 1930 and 1931 National Hillclimb Championships on the “Altoona”, and secure their place in Hillclimb history.

1930 EXCELSIOR OVERHEAD 750
1930 marked the height of the great competition in Professional Hill climbing in America. Excelsior was at  the top of the hill in 1929 with the introduction of the 750 Alcohol burning special. Harley Davidson has just built 20 special 750 overheads for the same class.

1924 HARLEY-DAVIDSON FHAC
This machine is a special 2 cam 2 bar FHAC with a keystone frame that went back to the factory for a Ricardo Chip upgrade.