The glory days of the Harley-Davidson dealer in the late 1940’s and early 50’s. This represents George Swim’s shop in Energy, Illinois 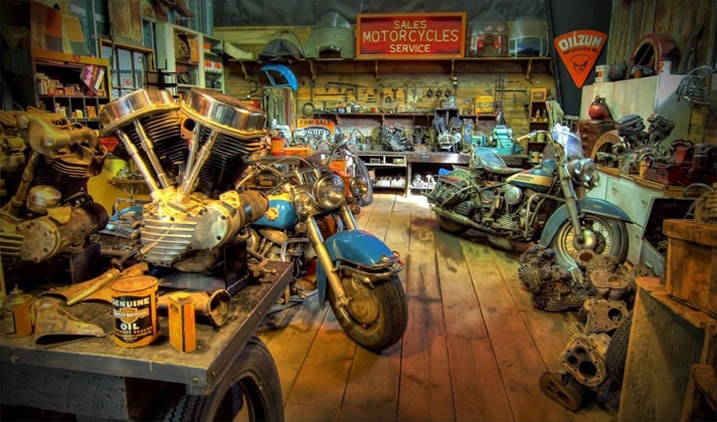 The “SWIM SHOP” has been a favorite at Wheels Through Time since the museum opened in 2002.  This lifelike exhibit exudes the pride and passion of the young entrepreneurs that came back from the great war with the desire to own and operate their own Harley-Davidson dealership.

These small shops were most likely to pop up in small towns giving the owners the comfort of low overhead and the ability to bring something special to their hometown. 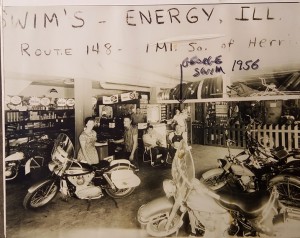 Often these “Ma and Pa” dealerships were heavily involved in racing and local club activities. Many formed their own clubs, enabling a sense of not only customer loyalty but more importantly brand loyalty.  Hundreds of these small dealerships popped up around the country, however, the manufacturing capabilities of both Harley and Indian had been diminished by the inability for the factories to purchase raw materials.

This was the heyday of the Harley and Indian wars and it’s not surprising the ability of these small dealerships are what kept the remaining two manufacturers alive. It was often said back in those days “we were lucky to sell a quart of oil, in order to buy a quart of milk”.

Times did not get easier for these new businesses. Profits were minimal and many “dealerships” were a combination of garage and living quarters. Most dealers relied on frugal business practices combined with the enthusiasm for the sport.

After 1950, dealers survived on true grit combined with the efforts of the American Motorcycle Association, still known today as the AMA. The AMA sanctioned not only clubs but sporting events on not only the hill but the ever growing Class C dirt track events. Both remaining manufacturers provided dealers and factory sponsor riders with special racing machines and a firm hand on the use thereof.

1953 marked the end of the production of the Indian motorcycle leaving Harley Davidson as the single remaining manufacturer in America. This left the door open for foreign machines from England and other European countries to expand their markets to America.  This was an uphill battle for those manufacturers for several reasons. First of all, it is arguable that the foreign machines were not designed for the long open roads and highways in America. But more so, their difficulties came from the organization that wholly sanctioned the sport in America, the AMA. 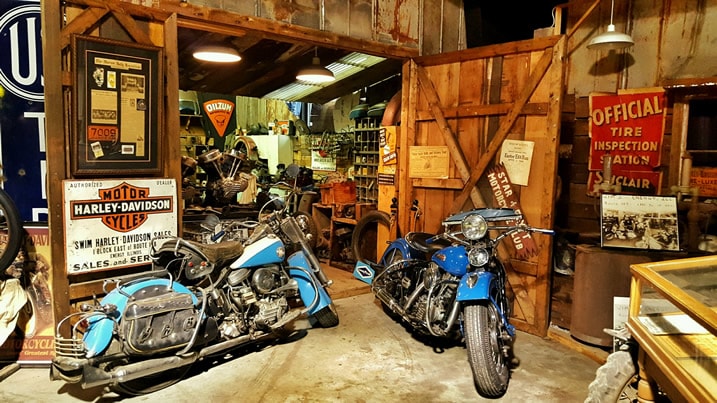 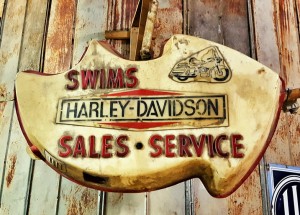 When George sold Dale the remnants of his old dealership in the mid 1980’s, it was very important to George that his old sign went with it. George Swim was a dutch man, notice the shape of his sign.

To confound matters further, Harley Davidson had an enormous voice in all of the decision making practices of the AMA.  Racing rules were established that favored the American V-Twin.  An example of this is the fact that the 750cc Harley and Indian side-valve engines were pared against the European and English machines that were limited to 500cc, claiming the EURO overhead valve machines had a distinct advantage in the ability to have a higher compression ratio.  So the AMA limited that as well.

All of this so called “favoritism” was bittersweet for Harley-Davidson.  Not only had their road going machines become bigger and heavier, but the enthusiasm for the sport in general had severely diminished.  Controversy had caused AMA memberships to diminish at the same rate the corporate profits at Harley-Davidson, the sole surviving manufacturer in America.

The “SWIM SHOP” at Wheels Through Time is a testament to the rugged individuals that not only survived the great war but the rigors of the independent businessman in small town America.

George and Wanda opened their dealership in 1948 in the small town of Energy, Illinois.  George had experience in mechanics and Wanda was the everything else parts person, book-keeper, and mother.

They started in a small building with a three room apartment in the back with a galvanized bathtub for bathing and an outdoor toilet. In 1952 they moved into a 2 story brick storefront on State Hwy 148 also in Energy, Illinois which had a population of 734.

George was a powerful 6 foot 3 man. He was a decorated WW2 Veteran serving the US Army in both the Pacific theater and with the occupation forces in Tokyo in 1945. His huge stature and competitive edge kept him involved in enduro races including the famous Jack Pine enduro. George was also known for his generous support of a fellow racer, often costing him valuable time.

While George was racing and running the dealership, Wanda was involved the the operations of the local club that “ran out of the shop’.

The club was called the STAR OF EGYPT MOTORCYCLE CLUB, and was the pride of the community.  Parties and socials mostly took place at the shop and road rides were frequent.  This was profitable but many times the “credit system” was established and dealers got their money – a little bit at a time. The Swims raised 3 children above the old shop and each helped out with not only household duties but also oil changes and tune ups.  The club lasted many years and the Swims operated the shop until 1972. In 1987, Museum founder Dale Walksler was contacted by George Swim to “come down and look at this junk”.

Fast forward to the present.  In front of you, around you, above you is…George and Wanda, their bikes, the shop, the parts, the tools, the signs, their papers…but mostly their memories. 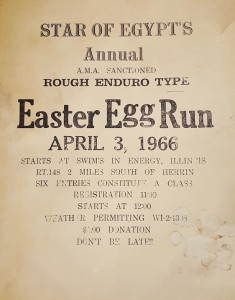 The Star of Egypt Motorcycle Club had quite a few interesting events. The early spring “Easter Egg Run” was always a favorite because it was one of the first rides of the year.

George’s favorite Jack Pine Enduro bike. He competed in several races on this machine. It still has the engine seal tag from the Jack Pine circa 1956. The bike is in perfect running condition at Wheels Through Time.

George’s famous 1936 VLH Eighty Enduro Bike. Notice the plate, 1958 and original green and silver fenders that came off this 1936 beauty.

George Swim was quite the Enduro rider. He rode this 1931 Harley in many Enduro races. He was also proud to be American - note the ‘Bought American’ decal on fuel tank.