Harley-Davidson and Indian both contributed to the war efforts starting in 1941.  In this combined effort over 80,000 motorcycles were produced in Milwaukee, Wisconsin and Springfield, Massachusetts. Although more Harley-Davidson machines were
produced, Indian still provided a major roll in the war. 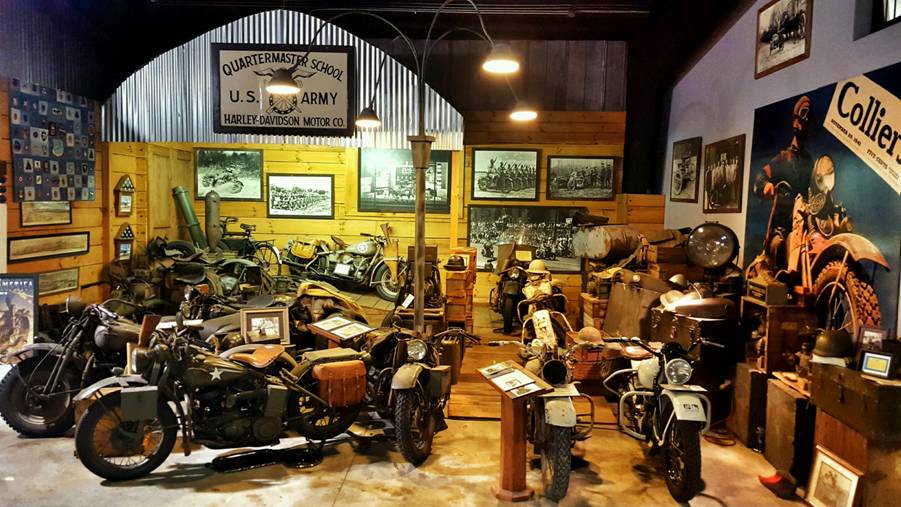 It is not surprising that motorcycles have been utilized as fighting machines from the earliest days of their invention.  Before World War 1, both Harley-Davidson and Indian were involved in the production of fighting machines. In World War 2, Harley-Davidson produced nearly 70,000 of these reliable and rugged machines. Indian produced nearly 25,000 for the great war.

Going back to the early days of the American two-wheeled fighting machine, their usefulness was recognized by the likes of Teddy Roosevelt and the forces of soldiers around the world. 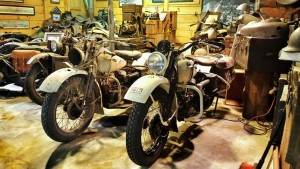 The fleet of Harley Davidson WLAs are the three Air Force motorcycles. Two of the machines remain in original condition, the third is in restored condition. You may remember these bikes featured on an episode of “What’s in the barn?”

The first recognition of military motorcycles in action took place during the border conflict in 1916 between General Blackjack Pershing and the legendary Pancho Villa in the border wars which were prior to World War I.  These motorcycles gained much popularity fighting against the Mexican horse mounted soldiers.  Probably most famous among all historical motorcycle military photographs depicts an American soldier described as the first “Yank and Harley to enter Germany” dated 11/12/18.  A memorable moment in history.

Harley-Davidson and Indian played an important part in World War II with their machines delivering messages, parcels, and doing recon missions at light-speed of the day.

Wheels Through Time’s Military Collection consists primarily of Harley Davidson Machines from both wars, including several rare prototypes and special use machines.